Step 5: Market – Make a huge deal about what you did ’cause that’s the only way it’ll turn into future work.

Fast forward: One year later. (If you wanna catch up what happened a year ago – start at the beginning of the Dream Big series) Throughout 2012, many people had helped me craft “On Wings of Hope” into the movie it is today. Suggestions on editing, creating the original music score, tweaking of the story line, … the list goes on and on.

When I had the dream of creating a short documentary, my original intent was to make the movie, give it to the client to use and have filmed some nice footage for my reel.

My huge dream, was going to end in a whisper. (Honestly I hadn’t even consider how to market the film.)

True, filming it had been a significant achievement in and of itself, but ask yourself:

“If you filmed a documentary in Afghanistan and no one saw it, was it really worth going?”

Then some funny things started happening (remember I said not to worry about the payoff, because it’s gonna come by itself?) I get a call from my friend “Hey, I just flew a National Geographic film crew into one of the remote airstrips you and I flew into, and they’d like to buy some of your flight footage to use in their documentaries. Are you interested?”

Wait – What? – National Geographic wants to use my footage?

Don’t they know this was the fist time I’d done this?

Hadn’t anybody told them, I’ve never filmed any aerial footage before?

Excuses again – you’d think by now I would have learned to recognize them, right? (Remember ignore the critics – including yourself?) Long story short, National Geographic uses some of my footage in one of their documentaries. A few weeks later the BBC called – same story. Currently PBS is going through the footage, with a german film maker, as well, to use in one of their upcoming films.

You know what? I was blown away. My first ever documentary footage had been purchased by some of the most prestigious, high end broadcast companies in the world, validating my dream.

NOW I knew, that I needed to make a big splash with the film, but I had no budget, no experience, no connections, no venue, … and had resigned myself to having my first documentary film’s premiere screening online or at my house with a few friends. (What a small vision to market the film – kind of sad, huh?)

Sound familiar (again)? Yup you got it. More excuses. Only this time I knew what I wanted, but I couldn’t see any way on how to pull it off. (Remember Go all in on your God-given opportunities and abilities?) Well that was about to happen again – in a big way.

In the Fall of 2012 I get another phone call from Daniel:

“Pascal, I’d love to see you in the spring? Can I come visit?”

“Well yeah of course, but you’re never here – you live in  Afghanistan and when you do come to the States for flight certifications or simulator training it’s never to Florida. What are you doing here?“

He continues: “I’m gonna pick up the plane.”

Turns out Daniel’s going to come to the States to fly one of the four planes, I had flown and filmed in, back to Afghanistan.

A few months later the plane is sitting at an airport 20 minutes from my house, getting new engines and an avionics upgrade – and my head starts spinning with another insane idea on how to market this film …

Listen to your heart. Mine’s saying: “It would be awesome to launch “On Wings of Hope” with a bang.

Ignore the critics. They’re saying: “No budget, no plan, no money, no venue, no audience, no chance.”

Go all in on the opportunities your given. “How big would you like this to be?”

So I called the place that’s making the upgrades to the plane:

“Can I show you guys a movie about Pactec?” They agreed. So I went and showed them the movie. After they saw it – the CEO gave me a tour through the hangars and repair shops his company owns. Riding through his main sales hangar, on a little golf cart, he asked me “How can I help you?”

What would you have said?

How would you have reacted?

Would you have conceived another impossible dream?

Hello! Have you been listening? Of course! I jump at that opportunity.

I tell him  “I need a place that’s big enough to park the twin engine plane, set up a large screen and host an audience for a movie premiere.”

He stops our golf cart in the middle of Hanar 62. This building is rather large. 20,000 sqft under one roof.

My house fits in here, and my pool,plus my 1/2 acre yard (and that includes the 2 bedroom cottage, my kids treehouse in the old oak and the circular driveway.)

“Would this be big enough?” he asks.

Well yeah – but even if he gives me this place for a half of what it normally rent for, I don’t have 5,000 dollars, my budget for promoting this film is ZERO.

To make another long story short, he offers me the place for FREE.

Even with the plane 20 minutes from my house and the offer to use the hangar for free, many of my well meaning friends told me

it would be a waste of my time,

it couldn’t be worth the effort,

Let’s go back to passion one more time: Setting up the premiere of “On Wings of Hope” (and a workshops for photographers, who want to move into motion, that I taught at the airport a week later) took months of work. Securing sponsors for the events, writing guest blog posts to publicize them, tirelessly working on twitter, Facebook, email campaigns, calling in favors, making short teaser videos, phone calls, invites, … Hey if you want to market and have no budget, guess you you is gonna be your marketing department? (If you don’t know take a second and go look in the mirror.)

You think I would have spend all that time and effort, if I wasn’t passionate about sharing this dream?

When all is said and done (remember a red carpet movie premiere I mentioned) the effort to market pays off:

My caterer provides the food for 100 people for FREE,

a DJ friend of mine lights the space and set up a sound system for FREE,

a photographer I know covers the event for FREE,

I run a social media marketing campaign takes care of the FREE publicity and the premiere ends up trending on twitter reaching well over 100,000 accounts in the final weeks,

some of my friends volunteer to help my set up for FREE ,

the only thing I end up spending money on is renting a projector, a screen and a couple of tables and I get those at a discount (‘cause I asked for one) and the costs end up being covered by the part of the profit from my Move2Motion workshops.

Remember: It takes time to let people know about your project, but even with no funds and little time you just need to look for opportunities and market, market, market!

This post is the 6th in a series of blog posts based on my speaking at the “Dream Bigger Conference” in February of 2014, giving a talk titled: “You’re wrong!”  If you missed the first five posts, just follow the link to read the introduction to the “Dream Bigger” series!

If you think you don’t have market your dream – you gotta read the next post in this series (It’s gonna be posted on Monday, March 24th at 10:15am) – I’ll talk about some of the rewards “On Wings of Hope” has been generating in a post called “Dream Big: Win big.” 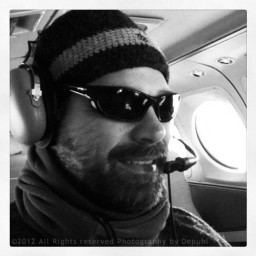